On Monday amid heavy snowfall the family members and relatives of the three slain youth who were killed in the Hokersar encounter demanded the bodies back and a fair investigation into the entire episode as they claimed that they were killed in a staged encounter.

The families said that the government should first of all allow them to exhume the bodies from Sonmarg so that they can do their decent burial in their respective villages.

The family members said that they have come to Srinagar even in this snowfall to get the bodies back and appealed LG Manoj Sinha to allow them to have the bodies for the burial. 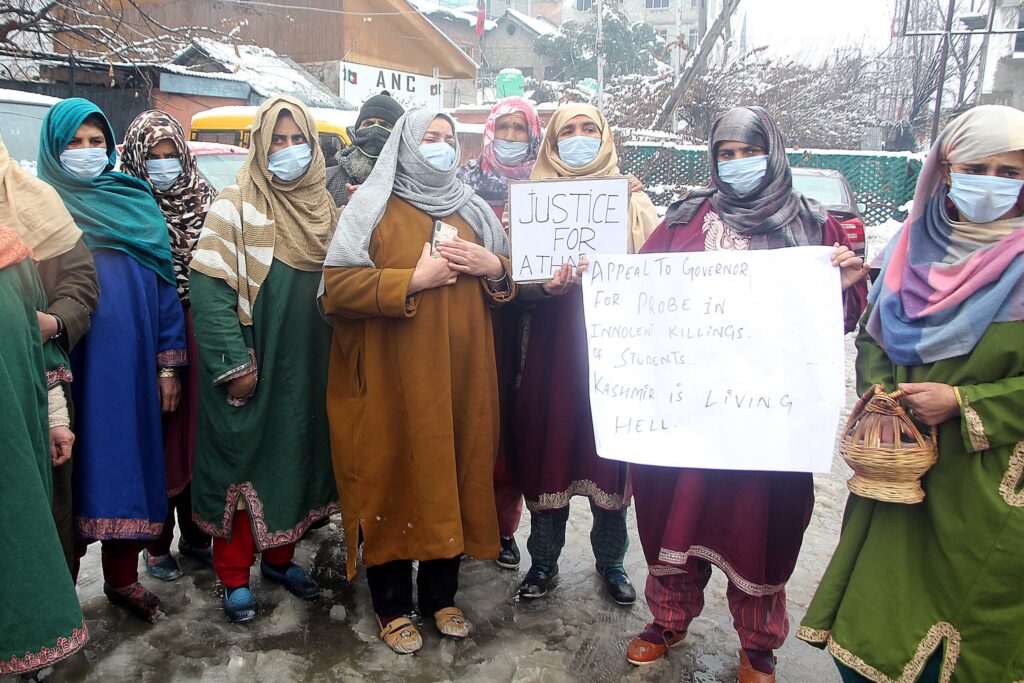 One of the fathers of the deceased youth has already dug the grave and is waiting for the body of his son. He has reputedly told the media that if the authorities will not give him the body back he will himself get buried in the same grave.

The family members of two of the three youth killed in a “gunfight” in Lawaypora area last week staged a protest in Srinagar’s Press Enclave demanding justice and bodies of the slain who have been buried in central Kashmir’s Sonamarg, local media reports said.

Carrying placards and shouting slogans, the wailing family members comprising of both elderly men and women who had made their way to Srinagar from south Kashmir braving chilly weather said that they wanted the bodies of their kin. “Just give me the body of my child.  I want justice, not money, I want the body of my son. Whom should I ask, don’t these people of India listen?” Mushtaq Wani, the father of the 16-year-old, Ather Wani can be heard saying in a video that is viral on social media.

In the video, he further says, “I want to tell the people of every country that I want justice, I want my son. He is just a 16-year-old kid. I have died already. Either give me my son or bury me there only. Give me my son! When will these forces be happy? Are they happy now after killing a piece of my heart? They have kept their money and medal for their children. They are feeding their children by killing mine. It’s a shame!”

Earlier, after the government forces denied the bodies of the three persons killed in an alleged gunfight on Srinagar’s outskirts, Wani dug a grave in his native village of Bellow, in south Kashmir’s Pulwama and demanded the body of his slain son, failing which he had warned of committing suicide, “Who do [troopers] kill for their stars? These small children. I congratulate the whole of India and the media who show that they have done an encounter. This was a fake encounter.”

Demanding the body of his son, he had said: “I will wait till I’m alive. Tomorrow, I’m going to Srinagar and if they don’t return me the body, I’ll commit suicide.”

On the day gunfight concluded, the Army’s General Officer Commanding (GoC) of Kilo Force, H. S. Sahi, said: “With the first light the firefight again resumed and militants used heavy ammunition against security forces.” Sahi claimed that the “three militants killed in the gunfight at Lawaypora on Srinagar outskirts were planning a big strike”.  However, after the photographs of the bodies went viral on social media, three families from south Kashmir claimed the killed trio and vouched for their innocence.

The trio was identified as Ather Wani from Bellow, Pulwama, Aijaz Ganaie from Putrigam, Pulwama, and Zubair Lone from Turkwangam, Shopian.

Earlier, in a statement, the police claimed that “background check also reveals that Aijaz and Ather Mushtaq, both OGWs [Over ground workers] variously provided logistic support to terrorists”.

“Antecedents and verifications too show that both were radically inclined and had aided terrorists of LeT (now so-called TRF) outfit. [sic] One of OGW presently under police custody has also corroborated Aijaz’s association with LeT terrorist Faisal Mustaq Baba who was killed in Meej (Pampore) encounter in June last year,” the statement added.

Thousands of Rohingya left homeless after fire in BD camp