Joe Biden accepts Democratic nomination: ‘I will draw on the best of us’

Joe Biden accepted the Democratic presidential nomination Thursday night, beginning a general-election challenge to President Donald Trump that Democrats have cast as a rescue mission for a country equally besieged by a crippling pandemic and a White House defined by incompetence, racism and abuse of power.

Speaking before a row of flags in his home state of Delaware, Biden urged Americans to have faith that they could “overcome this season of darkness,” and pledged that he would seek to bridge the country’s political divisions in ways Trump had not.

“The current president has cloaked America in darkness for much too long — too much anger, too much fear, too much division,” Biden said. “Here and now, I give you my word: If you entrust me with the presidency, I will draw on the best of us, not the worst. I will be an ally of the light, not the darkness.”

Biden’s appearance was an emphatic closing argument in a four-day virtual convention in which Democrats presented a broad coalition of women, young people and racial minorities while going to unusual lengths to welcome Republicans and independent voters seeking relief from the tumult of the Trump era.

The former vice president alluded to that outreach, saying that while he is a Democratic candidate, he will be “an American president.” And in an implicit contrast with Trump, Biden said he would “work hard for those who didn’t support me.”

“This is not a partisan moment,” he said. “This must be an American moment.”

The party has offered Biden, 77, less as a traditional partisan standard-bearer than as a comforting national healer, capable of restoring normalcy and calm to the United States and returning its federal government to working order. He has campaigned as an apostle of personal decency and political conciliation, and as a transitional figure who would take on some of the worst American crises — not just the coronavirus outbreak but also economic inequality, climate change and gun violence — before handing off power to another generation.

That rising generation, defined by its diversity and in many cases by its liberalism, was again in evidence Thursday, as it has been throughout the week, most notably with the introduction Wednesday of Biden’s running mate, Sen. Kamala Harris, the first woman of color to appear on a major party’s presidential ticket.

The program leading up to Biden’s address included speakers such as Sen. Tammy Duckworth of Illinois, an Asian American military veteran; Mayor Keisha Lance Bottoms of Atlanta, one of the country’s most prominent Black mayors; and Pete Buttigieg, the first openly gay major presidential candidate. All are younger than Biden by a quarter-century or more.

Buttigieg hailed Biden’s leadership on the issue of same-sex marriage in the not-distant past as a sign of how much progress Democrats could quickly make toward building “an America where everyone belongs.”

Duckworth, a former helicopter pilot who lost her legs in the Iraq War, used her remarks to denounce Trump’s leadership of the military and singled out for scorn his administration’s tear-gassing of peaceful protesters in Lafayette Park in Washington, D.C., in June.

The task that faced Biden on Thursday night, and that looms over him for the next 10 weeks, was assuring Americans that he had both the grit and the vision first to topple Trump and then to deliver on a governing agenda that would materially improve their lives. Biden has laid out an ambitious suite of plans for next year, should Democrats win power, but in the daily din of public-health emergencies and presidential outbursts, it is not clear how many voters are familiar with them. 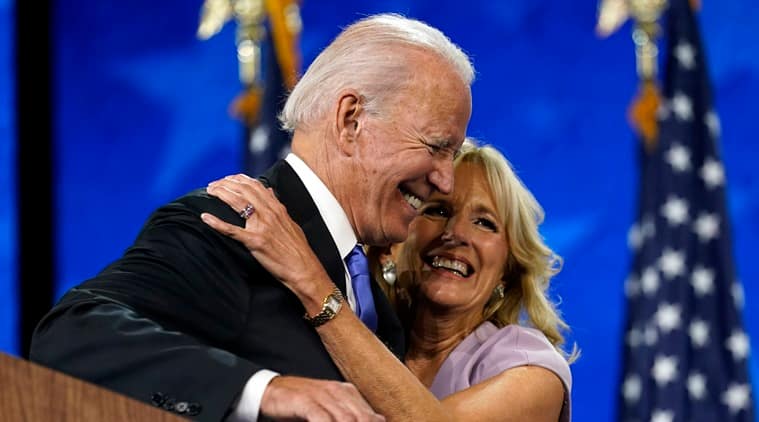 The party conveyed its governing priorities throughout the convention, with multiple segments featuring victims of gun violence and people struggling with the immigration system and the cost of health care.

Democrats have promised to redraw the country’s energy economy to fight climate change and to build new protections for Americans’ voting rights. Every night of the convention featured front-and-center vows to take on racism in the economy and criminal justice system, and to empower the generation of women whose political mobilization has reshaped the Democratic Party into a powerful anti-Trump coalition.

The overarching focus of the party, however, was on defining Trump as an enemy of public health, economic prosperity and democracy itself. More than any other modern political convention, this one situated the greatest threat to Americans’ lives and freedoms not in a foreign capital or a terrorist encampment, or in the executive suite of an insurance company or a Wall Street bank — but rather in the Oval Office, and in the person of the incumbent president.

“This,” Biden said, “is a life-changing election. This will determine what America’s going to look like for a long, long time.”

If Democrats depicted Trump as an aspiring autocrat, then in their telling Biden took on the role of a sturdy holdover from an earlier government — a chairman of Senate committees, a shaper of laws and a counselor to presidents who is capable of delivering the practical prize of national stability if not a more romantic version of national salvation.

For Biden, his speech Thursday night, at a Wilmington, Delaware, event center, was the culmination of nearly five decades in national politics, a career he began in his 20s as a Senate candidate who won a November 1972 election several weeks before he reached the constitutional age of eligibility to serve. After 36 years and two unsuccessful presidential campaigns, Biden finally achieved national office in 2008 as a political sidekick — Barack Obama’s running mate.

A child of Scranton, Pennsylvania, and Claymont, Delaware, Biden has long emphasized his family’s blue-collar roots in courting a multiracial coalition of working-class voters, as well as more affluent white moderates. In the Senate, he spent decades forging his credentials as an expert on foreign policy and the judiciary, along the way developing a reverence for Washington institutions and old-school Capitol Hill deal-making.

Should Biden win in November, he would be the country’s second Catholic president, after John F. Kennedy. He would also be the first since Ronald Reagan not to hold an Ivy League degree.

Earlier efforts to win the presidency in his own right ended in defeat and even humiliation. Biden’s campaign for the 1988 nomination collapsed amid plagiarism controversies, and his 2008 bid never gained traction. But this cycle, after eight years as Obama’s vice president, Biden entered the race as the front-runner. He is known to the country as a loyal adviser to a popular president, and as the resilient father of a tragedy-stricken family, possessed of an uncommon capacity to relate to voters experiencing grief. 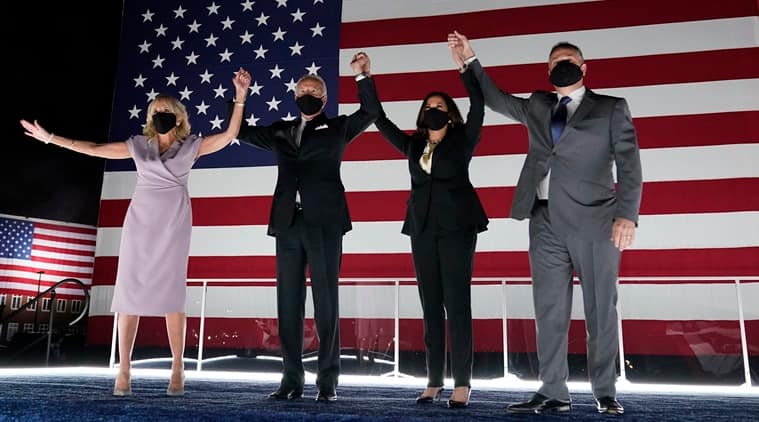 Sen. Chris Coons of Delaware, a close ally of Biden’s, paid tribute to his friend Thursday night, describing him as a man of deep faith.

“Joe knows the power of prayer, and I’ve seen him in moments of joy and triumph, of loss and despair, turn to God for strength,” Coons said, citing the “nuns and priests right here in Delaware who taught him and inspired in him a passion for justice.”

The overt emphasis on faith was striking at the event. But Biden has often cited his Irish Catholic upbringing on the campaign trail, a background that may help him connect with some swing voters in the Midwest in particular.

From the start of his 2020 campaign, Biden pitched himself as a sober, seasoned leader who stood the best chance of defeating Trump. It was a message that ultimately resonated with Democratic voters — especially African Americans and white suburban moderates — as he surged to the nomination despite facing great trepidation from younger and more progressive voters, and after stumbling badly in the first two nominating contests in Iowa and New Hampshire.

Biden enters the general election with a clear upper hand against Trump, leading him by wide margins in most national polls and appearing to hold a clear advantage in crucial swing states like Michigan and Pennsylvania. Biden’s electoral strength is derived mainly from the president’s deep unpopularity: Trump’s negative ratings have climbed and grown more intense since the onset of the coronavirus crisis. And swing voters this year appear far more comfortable with Biden than they were with several of his 2020 primary rivals — or with the Democratic Party’s previous nominee, Hillary Clinton.

Yet Biden’s advisers have cautioned that they expect the polls to tighten in the fall, and there is widespread anxiety among Democrats about the possibility that the pandemic may complicate the process of voting in ways that will disadvantage voters of color and others in their urban political base.

Even more than on previous nights, reminders to turn out the vote formed an insistent drumbeat throughout Thursday’s program. There were exhortations from, among others, Bottoms; Julia Louis-Dreyfus, the actor and comedian who served as master of ceremonies; and Alex Padilla and Jocelyn Benson, the top election officials in California and Michigan, reflecting Democrats’ concern that limp voter enthusiasm or Republican efforts to obstruct the vote could hinder Biden.

“We must pass on the gift that John Lewis sacrificed to give us,” Bottoms said. “We must register, and we must vote.”

Up to this point, Biden has taken a less-is-more approach to his campaign against Trump, converting his candidacy into a largely virtual affair and holding only sparse and infrequent public events. And so far that approach has seemed to work for him, much as this week’s stripped-down, long-distance party gathering has appeared to do. While television ratings have been down since the 2016 conventions, the Democratic events have still garnered robust viewership, and the party has avoided any significant technical glitches or eruptions of internal strife. 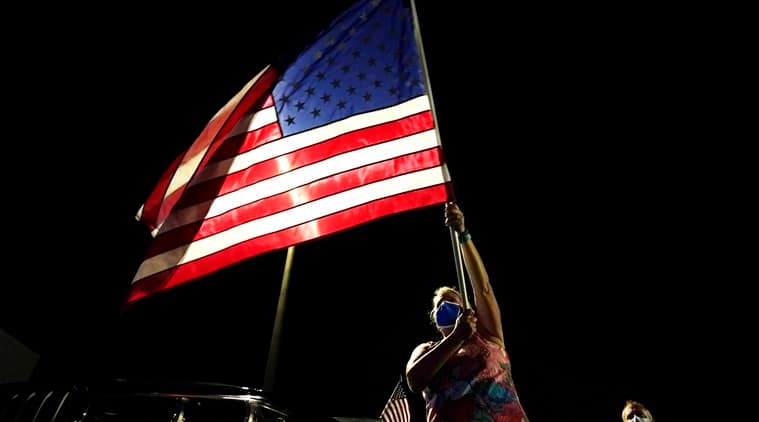 Helene Keeley waves the flag and watches the program outside the venue where Democratic presidential candidate former Vice President Joe Biden is speaking, during the final day of the Democratic National Convention, Thursday, Aug. 20, 2020, at the Chase Center in Wilmington, Del. (AP Photo/Carolyn Kaster)

Biden also does not seem imminently inclined to barnstorm the country to make his case.

In a briefing with reporters Thursday, Biden’s advisers emphasized that his decisions about travel would continue to be guided by the recommendations of public health experts, and that he and Harris, and their spouses, would campaign virtually in the meantime. Such an approach did not hurt Biden in the polls this summer, but in the final stretch of the campaign those restrictions may complicate efforts to advance an affirmative case for his candidacy.

But this week it was Trump who was at times obviously frustrated at his own inability to break into the news cycle: During Obama’s sober address Wednesday night, for instance, Trump posted several tweets entirely in capital letters raging at his predecessor.

Shedding the political convention whereby each party defers to the other during the week of its nominating convention, Trump has tried throughout the week to step on Biden’s general-election rollout, so far with little success. On Thursday, he traveled near Biden’s childhood home of Scranton, Pennsylvania, to attack Biden in a speech as “a puppet of the radical left movement” — a label that could scarcely have clashed more with the pragmatic profile Biden’s party has drawn for him in recent days.

In his address Thursday night, Biden promised to strengthen the labor movement and roll back Trump’s “tax giveaway.” And he described a “perfect storm” of challenges facing the nation: a pandemic, an economic crisis, climate change and “the most compelling call for racial justice since the ’60s.”

“So the question for us is simple: Are we ready?” he said. “I believe we are. We must be.”

Srinagar-Leh highway is open after hectic efforts by BRO