Pakistan announced their squad for the ICC Champions Trophy 2017 to be held in the month of June at England. Pakistan will be led by Sarfraz Ahmed. Umar Akmal and Azhar Ali have been recalled into the squad for the tournament. Umar’s brother Kamran Akmal, who was the leading run-scorer and declared Man of the Tournament in the Pakistan Super League, has been omitted. 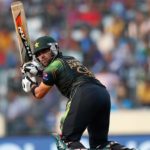 Akmal and Azhar were dropped from Pakistan’s national setup after the side’s crushing 4-1 defeat to Australia. Azhar also lost his position as Pakistan captain after that defeat. Pakistan play India in their first match of the season on June 4 before which they will also be involved in two warm-up matches against Bangladesh and Australia.