NEWDEHLI:-Shridhar Chillal, an octogenarian from India, will finally perform an ordinary chore that he has not done in the last 66 years – cut his fingernails – the longest in the world.

Chillal, also a Guinness World Record holder, has not cut the fingernails on his left hand since 1952 and has the longest fingernails in the world. But now at age 82, he is finally ready to cut his nails.

The Ripley’s Believe It or Not museum in Times Square here will host a “nail clipping ceremony” today where Chillal’s nails will be cut.

It is estimated that the nails have a combined length of 909.6 centimeters. Chillal’s longest single nail is his thumbnail, measuring 197.8 centimeters. He had made it to the the Guinness Book of World Records in 2016 for having the ‘Longest Fingernails on a Single Hand Ever’. 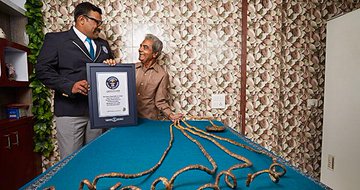 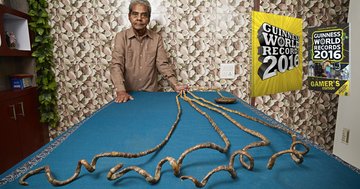 No Eid sweets exchanged by BSF with Pakistan; done with Bangladesh