Srinagar: Taking strong note of harsh remarks of cabinet minister in PDP led coalition government Chander Prakash Ganga, Valley industrialists while backing the decision of Federation of Chambers of Industries Kashmir (FCIK) have decided to boycott Industries and Commerce minister for his disgusting and provocative remarks against protesting youngsters of the valley and have demanded his removal from the cabinet. 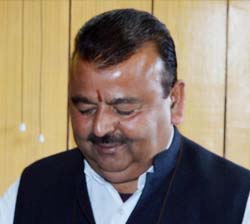 According to spokesman, a series of meetings and protests were held at various industrial estates across valley to condemn the statement of the minister advocating for use of more lethal force against the protesting students and youth who have already been victim of state atrocities and brutalities.

The sit-in according to spokesman was participated by the entrepreneurs and workers of the estate which, besides the president, was also addressed by other senior members.

The speakers demanded immediate dismissal of Ganga from the cabinet besides initiating legal prosecution against him. “His street language and rude behaviour is deplorable and unbecoming of a minister”, said the speakers, adding that such a person does not even deserve to be a Member of Legislative Assembly. The speakers asked the Sangh Pracharak Ganga “whether he or his kinfolk would have pelted stones at the government forces if he received bullet ridden or maimed body of his innocent son.” The minister being a part of the government should introspect instead of issuing reckless dictates.

The protest meetings against the derogatory remarks of the minister were also held at industrial estates of Sopore, Khunmoh, Sanat Nagar, Zakura, Ganderbal, Rangreth, Baramullah, Zainakote and other places demanding sacking of the fascist minded minister.

Earlier on Thursday, the Federation of Chambers of Industries (FCIK) had demanded sacking of Industries and Commerce minister Chander Prakash Ganga for his reprehensible and reckless remarks about protesting youth of the valley and his advocacy of barbarian tactics to tackle these teenagers.

In a meeting held under the chairmanship of President FCIK Er. Mukhtar Yousuf, the members while condemning the statement of the minister had demanded judicial prosecution for recommending tactics to deal with descent in the valley which go against the very spirit of even Indian constitution. The members have called upon a social boycott of the minister till he apologises for obnoxious statement made by him. “His bragging that government forces compelled children to shout slogans against Pakistan reflects the extend of oppression to which people are subjected to by the forces,” the FCIK had stated.