India Coronavirus Cases: Pune has now overtaken Mumbai as the city with the maximum number of novel Coronavirus infections in Maharashtra. In fact, after Delhi, it has the highest number of cases in the entire country.

Delhi continues to have the highest number of confirmed cases, at 1.52 lakh, but has been adding only about 1,000 new cases every day. At the rate Pune is currently growing, it is likely to overtake Delhi very soon.

Pune was one of the first cities in the country where the infection had been detected in the country. But it always had a fewer number of cases than Mumbai, which for a very long time had the maximum number of infected people in the country. The recent surge in Pune is however attributed mainly to an increase in testing. Pune is currently conducting the most number of tests in Maharashtra, and almost twice the number in Mumbai. Pune had ordered one lakh antigen tests in July, which it is near to exhausting, and has ordered another one lakh kits now. 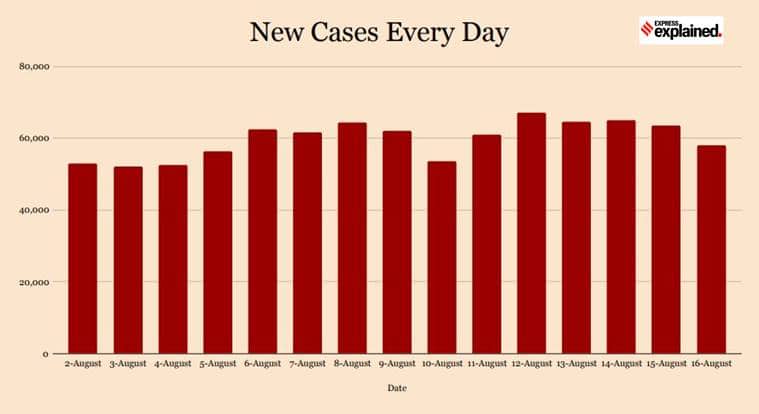 Less than 58,000 new infections were detected across the country, much lower than the 64,000-65,000 that were being discovered throughout last week.

Because most of the cases in Pune have emerged only in the last few weeks, the city already has the highest number of active cases in the country, almost four times that of Delhi. As on Sunday, Pune had over 41,000 active patients, while Delhi had less than 11,000. Mumbai has about 18,000 active cases right now. Chenai, which has seen 1.16 lakh people getting infected till now, has about 11,500 active cases.

By Sunday evening, the number of diagnostic tests for novel Coronavirus in the country had crossed the 30-million (three crore) mark. Only China (90 million), the United States (70 million) and Russia (32 million) have carried out more tests than India.

Also on Sunday, the death count in India crossed 50,000. There were 941 deaths reported on Sunday. Only three other countries, the United States (1.73 lakh), Brazil (1.07 lakh) and Mexico (about 57,000) have seen more deaths due to novel Coronavirus. Across the world, more than 7.73 lakh people have so far died due to this disease.

The number of new cases dipped a bit on Sunday. Less than 58,000 new infections were detected across the country, much lower than the 64,000-65,000 that were being discovered throughout last week. But this is now a familiar pattern. Far fewer number of tests are carried out over the weekends due to which the new detections usually show a drop on Sunday and Monday. Last week, India had been testing over 8 lakh samples every day. Over the weekend, however, this number dropped to 7.46 lakh and 7.31 lakh.

The total number of confirmed infections in India now stand at 26.47 lakh, out of which more than 19.19 lakh, or about 72.5 per cent have recovered from the disease.

Shab-i-Mehraj holiday to be observed on March 12