Modi’s statement from the all-party meeting (APM) on Friday that no one had entered Indian territory or captured any military posts, the government Saturday said the violence on June 15 happened because China was trying to erect structures “just across the LAC (Line of Actual Control)” and did not desist from such actions.

“The APM was also informed that this time, Chinese forces have come in much larger strength to the LAC and that the Indian response is commensurate. As regards transgression of LAC, it was clearly stated that the violence in Galwan on 15 June arose because Chinese side was seeking to erect structures just across the LAC and refused to desist from such actions.”

“Prime Minister was clear that India would respond firmly to any attempts to transgress the Line of Actual Control (LAC). In fact, he specifically emphasized that in contrast to the past neglect of such challenges, Indian forces now decisively counter any violations of LAC (“unhe rokte hain, unhe tokte hain”),” the government said.

There was criticism from several quarters after Modi’s remarks had become public. Congress senior leader Rahul Gandhi questioned Modi on Twitter on Saturday morning, that if the Chinese troops were not on Indian soil why were Indian soldiers killed, and accused the Prime Minister of surrendering Indian territory.

Gandhi wrote: “PM has surrendered Indian territory to Chinese aggression. If the land was Chinese: 1. Why were our soldiers killed? 2. Where were they killed?”

In the statement issued on Saturday, the government also said 43,000 sq km of Indian territory has been yielded in the last six decades under circumstances with which this country is aware of. 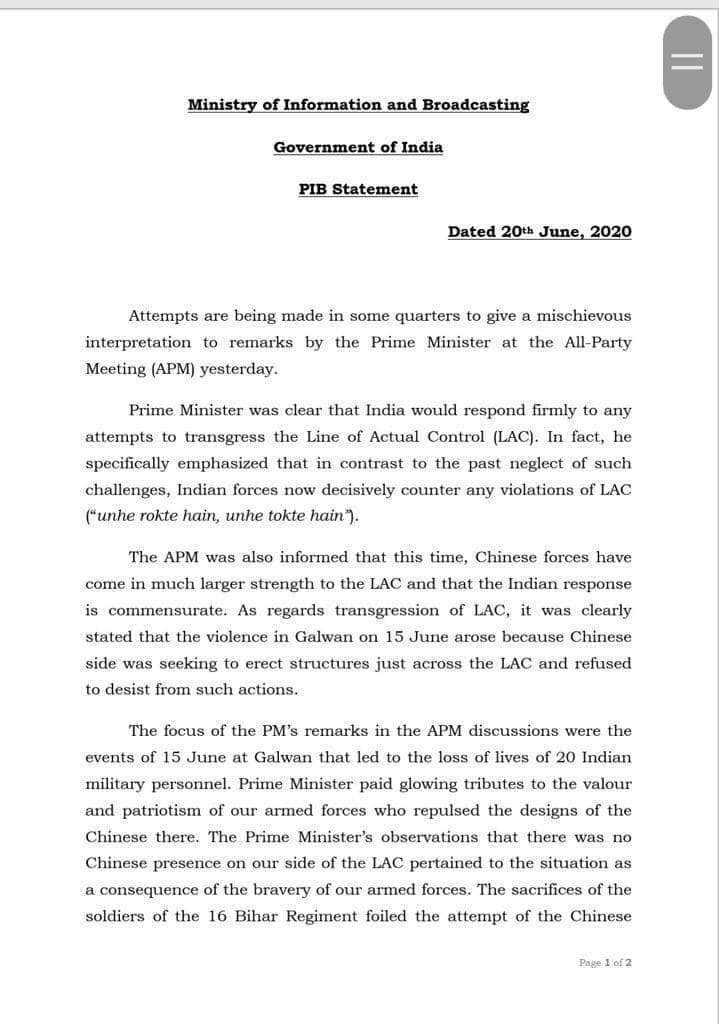 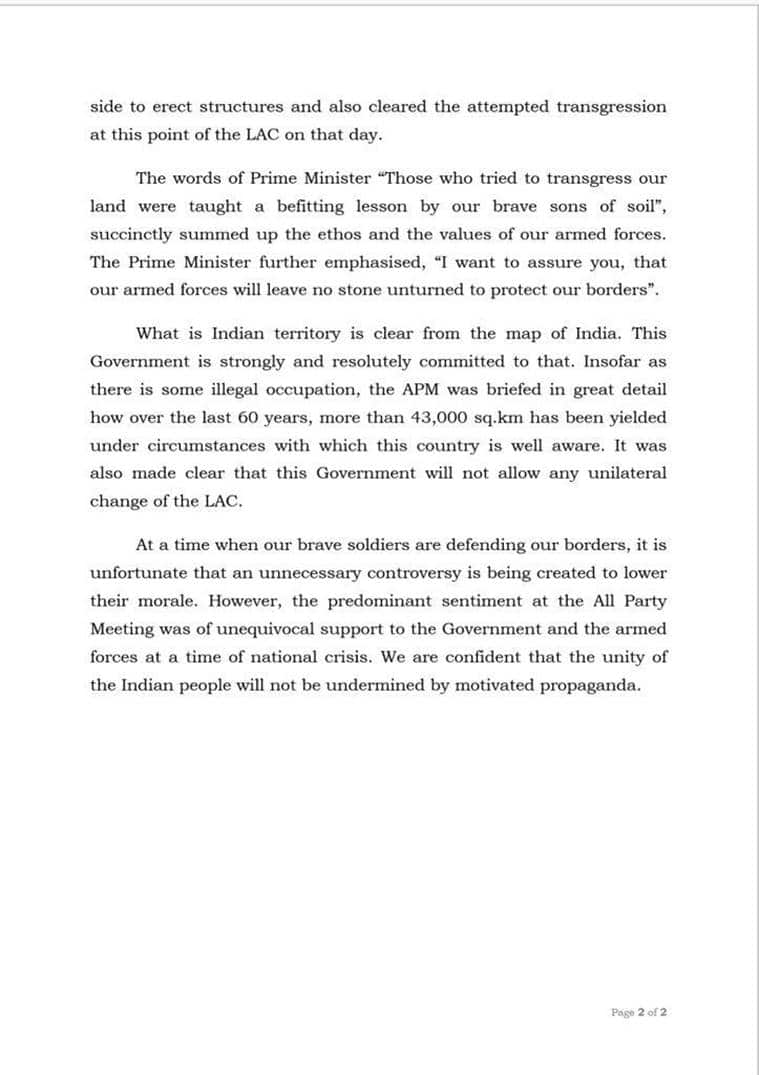 “What is Indian territory is clear from the map of India. This Government is strongly and resolutely committed to that. Insofar as there is some illegal occupation, the APM was briefed in great detail how over the last 60 years, more than 43,000 sq.km has been yielded under circumstances with which this country is well aware. It was also made clear that this Government will not allow any unilateral change of the LAC.”

It stated that Modi’s remarks in the discussions “were the events of 15 June at Galwan that led to the loss of lives of 20 Indian military personnel”.

The government said the Prime Minister had “paid glowing tributes to the valour and patriotism of our armed forces who repulsed the designs of the Chinese there” and his “observations that there was no Chinese presence on our side of the LAC pertained to the situation as a consequence of the bravery of our armed forces. The sacrifices of the soldiers of the 16 Bihar Regiment foiled the attempt of the Chinese side to erect structures and also cleared the attempted transgression at this point of the LAC on that day.”

It also claimed that Modi’s comment that “those who tried to transgress our land were taught a befitting lesson by our brave sons of soil,” on Friday had “succinctly summed up the ethos and the values of our armed forces” and he had even emphasised “that our armed forces will leave no stone unturned to protect our borders”.

The government called it unfortunate that a controversy was being created at such a time. “At a time when our brave soldiers are defending our borders, it is unfortunate that an unnecessary controversy is being created to lower their morale. However, the predominant sentiment at the All Party Meeting was of unequivocal support to the Government and the armed forces at a time of national crisis. We are confident that the unity of the Indian people will not be undermined by motivated propaganda.”