Athens, Greece – While national lockdowns to stop the spread of coronavirus are ravaging economies around the globe, for Greece, the pandemic is forcing a rapid and long-overdue embrace of digital platforms that is placing Greek businesses and the government on stronger footing to deal with the crisis and its fallout.

“Remote work is moving forward in leaps and bounds, and could leave us with an important legacy [after the crisis],” says Marco Veremis, a technology entrepreneur and angel investor.

Hundreds of employees at Upstream, a mobile technology firm Veremis cofounded, have been working remotely for three weeks, communicating via Slack, the business-to-business messaging service, and video conferencing services like Google Hangouts, Zoom and Microsoft Teams.

But Veremis is even more heartened by how quickly his less-tech savvy clients are adapting to doing business under lockdown.

“A very large chunk of the marketplace is now being educated by the crisis,” he told Al Jazeera.

Supermarkets in the country are a case in point. Social distancing measures mandate that grocery stores have only one customer per 15 square metres (161 square feet). Rather than queue in physical lines or risk exposure by venturing outdoors, droves of customers have taken to shopping online – many for the first time in their lives.

Banks have yet to publish the latest figures on credit card use, but anecdotal evidence of the surge in online grocery transactions is on display at peak shopping times, when supermarket web platforms turn away digital customers.

Overnight revolution years in the making

The Greek economy has been slow to move online in a meaningful way, in part because of the burden it places on small businesses. Firms with fewer than 20 employees account for nine out of every 10 jobs in Greece.

But effectively managing the coronavirus outbreak has forced consumers to stay home, which is motivating businesses and the government to make the long-talked-about digital revolution happen virtually overnight.

“Most websites belonging to retail shops used to just post the opening times. Now there’s an announcement saying, ‘we may be closed but we are ready to serve you digitally’,” says Diomidis Spinellis, professor of software engineering and head of the Department of Management Science and Technology at the Athens University of Economics and Business.

Despite recent improvement, Greece still ranks among the lowest countries in the European Union for transparency, according to Transparency International, even below most of its formerly communist neighbours that have enjoyed market economies and democracies only since 1990.

But in the span of a few weeks, the ruling New Democracy Party has placed scores of online and mobile state services on a single platform – gov.gr.

“There were some 500 e-government processes when the Coronavirus hit, but they were scattered and many people didn’t even know of their existence. What we did was to incorporate them into one platform,” digital governance minister Kyriakos Pierrakakis told Al Jazeera. “We have also added more functions that have proven to be the most popular such as e-prescriptions and e-powers of attorney.”

The move is one which Prime Minister Kyriakos Mitsotakis has been keen to highlight. In Parliament on April 2, he called gov.gr “the portal of the new, digital state”.

Education is also undergoing a lightening transformation. Greece closed public schools on March 10. Even though it had no distance learning infrastructure in place, high school and middle school students were being taught digitally just two weeks later.

“We managed to do in a few weeks what we were planning to do in months and what others didn’t do for years,” said Mitsotakis, who came to power last year promising an innovative, digital economy and a state made less expensive through e-government. 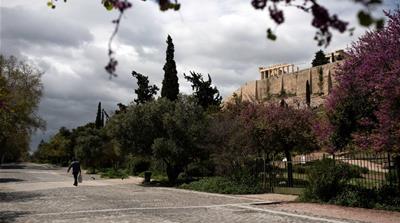 A pedestrian street under the Acropolis is nearly empty as coronavirus containment measures keep tourists away from popular Greek destinations [File: Alkis Konstantinidis/Reuters]

Greece has nearly 2,000 confirmed cases of COVID-19 and 87 people in the country have died of the disease, according to Johns Hopkins University – statistics that are on the lower side compared with EU countries with similarly sized populations.

Athens responded to the unfolding crisis swiftly. Greece reported its first case of COVID-19 on February 27. Schools were closed on March 10, and the following week all non-essential retail activity, conferences, the hospitality industry, and church services were halted. Towards the end of March, businesses were asked to institute remote work protocols and public schools launched distance learning.

There are no official forecasts yet of the expected toll the outbreak could take on Greece’s economy, but most economists agree the country will fall into a deep recession. The government has announced an emergency stimulus package to shore up workers and businesses worth 6.8 billion euros ($7.4bn), financed by the European Central Bank.

At this stage it is difficult to quantify to what degree digitisation is helping lessen the economic blow from coronavirus or how quickly it could help the economy bounce back when the health crisis ebbs. One of Greece’s biggest revenue drivers is tourism – a sector dominated by client-facing interactions.

“If the entire tourist season is lost, [a recession of about 10 percent for 2020] is unavoidable,” one economist told Al Jazeera on condition of anonymity.

But digitisation has eliminated social distancing measures as a barrier to future fiscal aid packages. The government launched an encrypted e-signatures protocol that is now enabling the cabinet to introduce, securely share and sign bills.

The digitisation drive is also making it easier for authorities to track the virus’ progression.

“Look how simply the lockdown is being monitored,” says Veremis. “You send a text message and you’re self-accountable,” he says, referring to the government stipulation that Greeks must report whenever they venture out of doors via their mobile phones.

“There are spot checks by police and if you’re caught you pay a serious fine. That’s a microcosm of the digital relationship that should exist between people and the state,” Veremis added. “Both needed a big shock like this to show each other trust and move on to simple procedures outside the [state] bureaucracy, which was self-sustaining.”

Amid spike in Covid-19 cases, J&K prepares for Amarnath Yatra via shorter route

With new WHO guidelines on face masks, what are rules for wearing them around the world?