Ashura observed with reverence across J&K

Srinagar, : Youm-e-Ashura was observed today with religious fervour and reverence throughout Kashmir to pay tributes to Hazrat Imam Hussain (RA), the grandson of Prophet Muhammad (PBUH), and his companions for their supreme sacrifice in the battlefield of Karbala.

Alam and Zuljanah processions were taken out in all districts across Kashmir. Thousands of Azadars or mourners participated in a procession in Shia-dominated neighbourhoods of Old Srinagar. 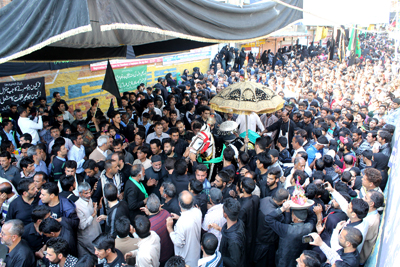 Reports of Alam and Zuljanah processions being carried out by Shia mourners were also received from other parts of Valley including Budgam, Magam, Mirgund, Pattan, Ganderbal and Baramulla. All these processions culminated peacefully and no untoward incident was reported.

A police spokesman said that today being 10th Muharram a number of processions were taken out across Kashmir in which thousands of people participated. “In view of the sensitivity of certain areas, restrictions was imposed in some police station (areas) of the Old City,” he said.