The treasury of tulips in Kashmir

srinagar:-A message from my old friend Shaheen who teaches at a university in Kashmir, woke me up that morning. “Tulip Garden is opening in a week. If at all you can manage, let me know.”

In response to Shaheen’s message there I was catching an early morning flight to Srinagar!

From afar, I saw a sea of colours, that remains an indelible memory for me. Thousands of tulips swayed in the breeze, making conversation with the crystal blue sky. They stood out in their rich reds, creams, violets, yellows and purples. The two hours that I spent on that March morning , strolling throughthe Indira Gandhi Memorial Tulip Garden was unforgettable. 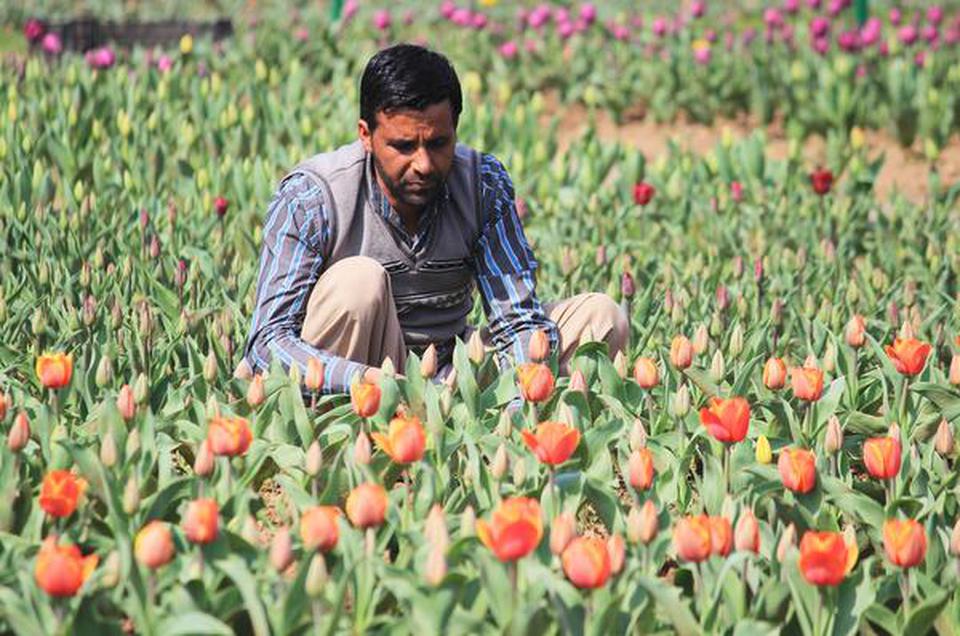 Until then, I had seen only images of tulips from The Netherlands in photos and in the art of the 19th century lithographer Hermann Dudley Murphy, and the Dutch painter, Judith Leyster, whose solitary painting Tulip is still considered a masterpiece.

Inside the vast garden, thousands of visitors roamed around and chatter filled the air. I watched as a a woman in her 50s, wearing a flowery cap, bent down to take a closer look at a red tulip.

She looked at me with a smile and said, “This is my fourth year at the gardens.” Keiko Bang, a math teacher from Busan, South Korea, was here as part of a 40-member teacher group.

Deep inside the garden, I reached a relatively quiet section. I stood in a pool of cream tulips that stood their ground in that riot of colours. In the middle of the bed of flowers, I met 33-year-old Bashir Ahmed, one of the lead gardeners working here since 2007. In Hindi interspersed with Urdu, he replied shyly to my questions. “Each year, more varieties are added, and now we have some rare types that have been imported from Holland directly. I have not been abroad, but I think ours is the best.” I decided to take a break and savour the famous Kashmiri kahwa (an infusion made with sliced almond and saffron strands) at the crowded food kiosk.

There I ran into a couple on their honeymoon. The bride told me this is where her parents honeymooned three decades ago.

“We decided to come to Kashmir,” she said. “The tulips were just the icing on the cake.”

* The largest tulip garden in Asia is situated at the foothills of the Zabarwan range, with an overview of the ethereal Dal Lake, and seemingly unending bloom of 1.5 million tulips from 46 varieties. This year, the garden is scheduled to open on March 25 and will stay open till April 15.(theHindu)