SRINAGAR: Insha Mushtaq, the teenager who emerged as a symbol of tragedies of Kashmir’s pellet victims after she lost both her eyes in the 2016 unrest, is finally back to the school. She has taken admission in 11th class from Delhi Public School (DPS) Srinagar on Wednesday.

Insha had qualified her matriculation examination through J&K State Board of School Education in January 2018, with a note that needs she needs to improve. She has to appear in her mathematics again.

Insha Mushtaq, a resident of Sedow village in Shopian was hit by around 350 pellets on her face when she was trying to watch the protests on the main road from her kitchen window. As the pellets hit her, she fainted instantly. It was July 12, 2016, few days after Burhan Wani was killed in an encounter in a Kokernag village.

Insha was then rushed to Srinagar’s SKIMS. Next time, she regained her senses, she was already blind. Later she was flown to other hospitals in Delhi and Mumbai. But the interventions by all the doctors between Srinagar and Mumbai helped her regain even iota of vision.

At one point of time, separatist leader Shabir Shah adopted her and flew her to a doctor outside. That also proved an intervention without any fruit. Even her family was taking her to some faith healers for some time till they lost all hopes.

Chief Minister, who had visited Insha in Delhi’s AIIMS had assured her help. Many months later, she announced a gas agency for her so that it generates enough of income to help her survive.

It was after facing a crisis for all these months that Insha has started going to school again, thanks to the DPS Srinagar that runs a special block for specially-abled children.

“The DP Dhar Trust has arranged her accommodation in Rajbagh wherefrom she board the school bus,” a senior DPS functionary said. “By next six to eight months, she will be in a position to independently come and go to school without any support.” 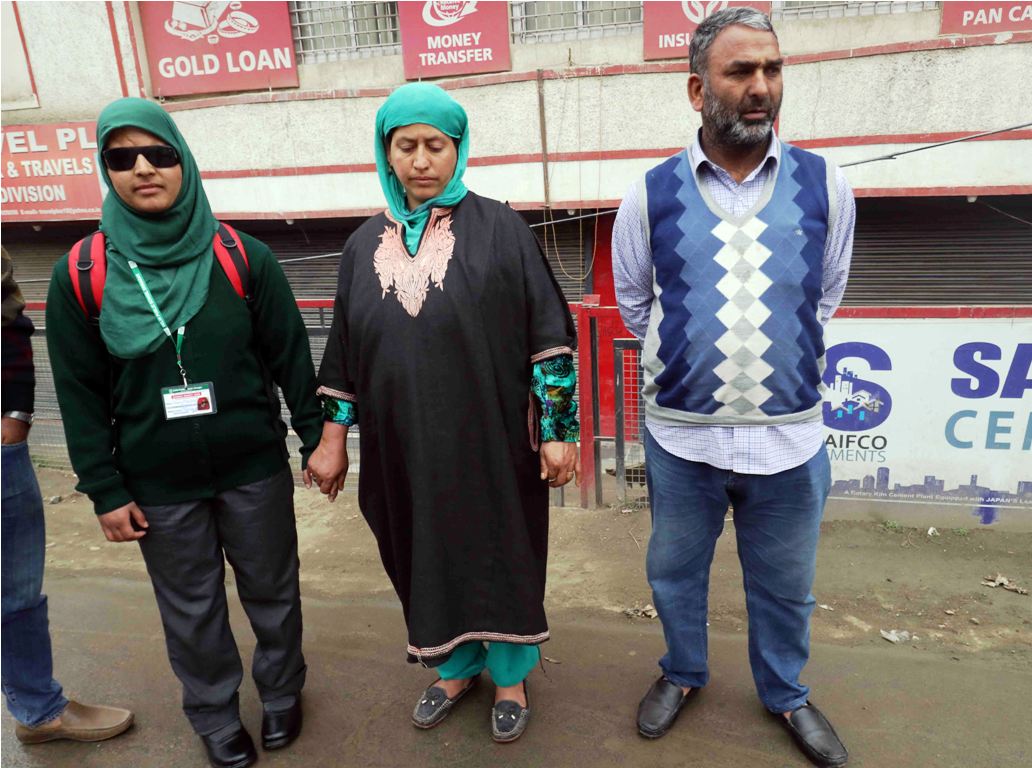 Insha Mushtaq with her parents outside DPS Srinagar, KL image by Bilal Bahadur

School sources told Kashmir Life that she along with eight other visually impaired people – the eldest being 51 – would be trained in picking up the art of Brail system, computers and English language. “It will take six months and then she will be joining the regular classes,” the official said. “In two years time, she will be in a position to sit in the twelfth class examination as CBSE has a lot of concessions for such kids.”

DPS Athwajan is the only educational facility in the state that is offering education to the specially-abled children. “Right now, we have 135 specially-abled children enrolled in the centre in addition to nine in the visually impaired section which is being taken care of by 47 specially trained teachers,” the DPS official said. “We have started constructing a separate block for them now and it must be ready this summer.”

Right now, Insha is being taken care of by her mother who lives with her in Rajbagh.