Srinagar:-Kashmiri Pandits living across Kashmir celebrated Hehrath, the Shivratri festival on Tuesday. Unlike the rest of the mainland, the festival is strictly personal and rituals take place at home and Temples. Pandit families living ll over Kashmir received their relatives and friends who had come to congratulate them for the festival.
Temples wore a festive look as devotees made a beeline to participate in the special prayers. The festival holds an important place among Kashmiri Pandits who celebrate it to mark the wedding of Shiva and Parvati by cooking traditional Kashmiri food, especially fish. The occurrence of rain or snowfall on this day is considered to be a good omen.
The biggest gathering of the festival usually takes place at Shankaracharya Temple, Dal Lake. Hundreds of devotees also throng Khir Bhawani temple at Tullamulla in district Ganderbal. The temple authorities at Ganpatyar and Hanuman Mandir at Amira Kadal also hold special Poojas throughout the day followed by celebrations in the evening.
in certain cases, the Pandit families may cook mutton, some stay with fish and there are people who simply do not interact with others for two days. In the mainland, however, this festival is being celebrated by having formal functions in the temples.
Outside Kashmir, the Shivratri means eating vegetarian food but here in Kashmir, they eat fish, mutton and all delicacies. Here it is being celebrated as a marriage of Lords.
Mahant Parma Nandas, a head priest in Ganpatyar and Hanuman Mandhir said the celebrations of these festivals are one of the many things that distinguish from their counterparts living in the mainland India. the main puja of the festival is somehow attached to snow, rain or a drizzle, Nandas said.
A Hindu boy pouring milk at Lord Shiva’s idol at Ganpatyar Mandhir Amira Kadal Srinagar, KL photo by Bilal Bahadur
Another head priest Ganesh Das said they faced no problem in managing whatever they required. Almost everything is available there in Temple including fish, mutton and vegetables.
“We always wanted and even want now that peace remains in Kashmir valley, the harmony between the Hindus and Muslims should be always encouraged,” Ganesh Das said.
Meanwhile, The Jammu and Kashmir Chief Minister, Mehbooba Mufti and Governor N N Vohra have greeted the people of the State on the occasion. 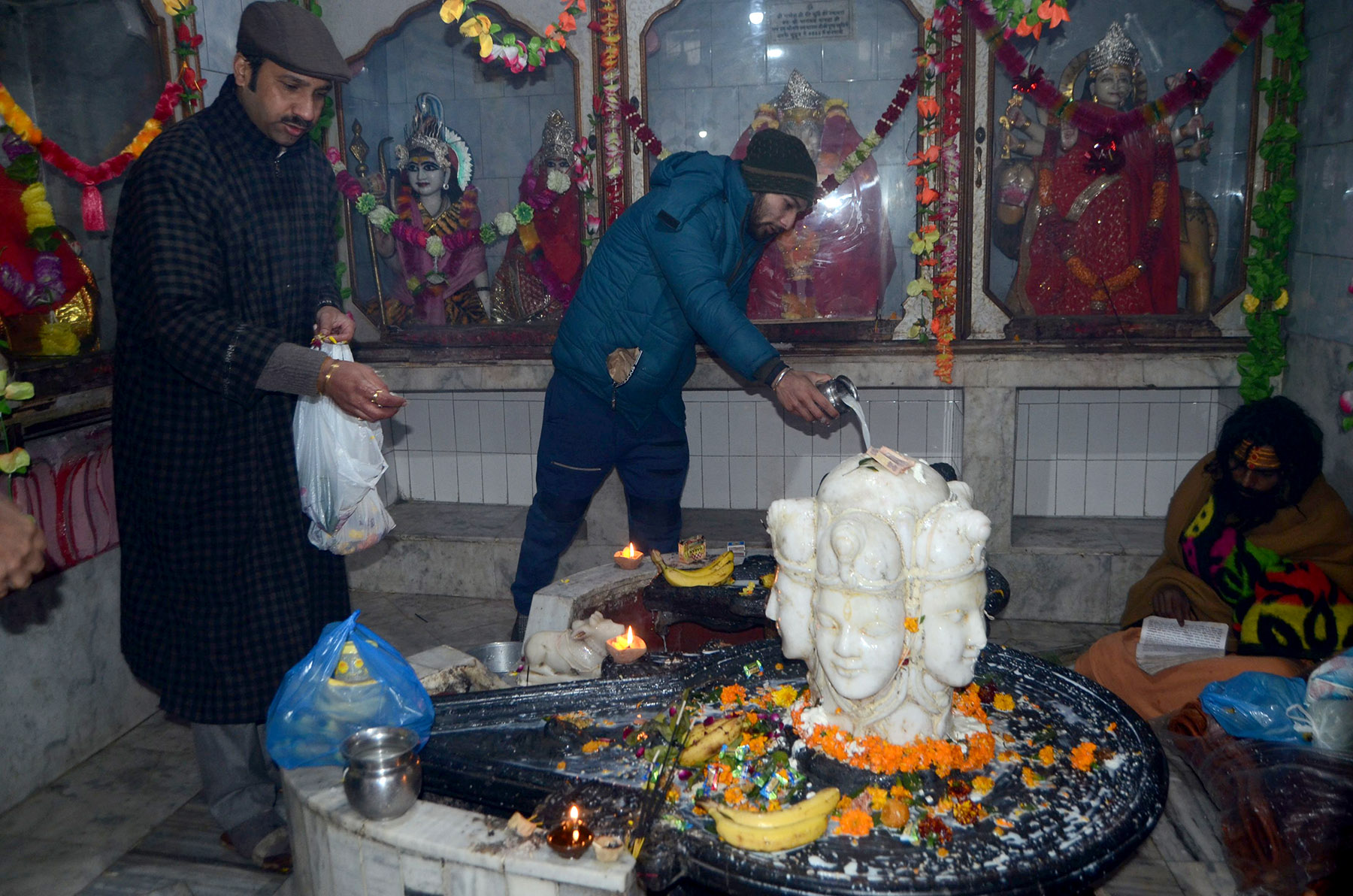 The CM”S spokesman said that Chief Minister hoped that the day ushers the State into a new era of peace, progress and development and strengthens bonds of brotherhood among the people.
Mehbooba’s spokesman has quoted her saying “the festival of Mahashivratri has both religious and cultural importance as the day is celebrated by the people of all shades in the State.” She recalled that the day is celebrated in Kashmir Valley as Hairath by Kashmiri Pandits in amity with their Muslim brethren.
The Jammu and Kashmir Governor N N Vohra in his message symbolizes the values of piety, devotion, brotherhood and harmony, which are the hallmarks of our glorious cultural ethos.
Wishing the people a happy Mahashivratri and Hairath, the Governor has prayed for peace, progress and prosperity in the State.

SC proposes transportation of all stranded migrants in 15 days, reserves order for June 9