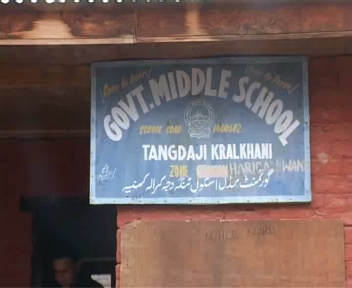 Ganderbal: The neglected Government-run schools in district Ganderbal are symbolic of deteriorating quality of education system in Kashmir. Many government schools in Ganderbal are marred by the lack of infrastructure and other problems which has affected education of Students.

The Government Middle School Tangdaji, in Kangan area of District Ganderbal is one of the biggest example of negligence where 9 classes operate from only two rooms. The students enrolled in this Government school mostly belong to families who are living below poverty line. The existing School building got damaged in year 2014 due to flash floods and avalanches which were never re- looked and renovated by the concern department with the result students were compelled to continue in two rooms which are also partially damaged. The present accommodation is also posing threat to the lives of these poor students.

Besides complaining dearth of teaching staff, Students say that they are not able to understand what they are taught by the teachers, while as, teachers in the school are not comfortable to teach students as they have to take nine classes in a two room resulting chaos, confusion and noise. The teacher says despite repeated requests made to higher authorities no action has been taken so far. Government has made it mandatory for primary schools to have an average space of 2 sq. Mts. per student. But clearly the rule has been thrown to the winds.