Life disrupted as lawyers call for general strike in Jammu

jammu:-Jammu High Court Bar Association on Wednesday struck work over various issues including demanding a Central Bureau of Investigation probe into the Kathua rape-cum-murder case and deportation of Rohingya immigrants, leading to disruption of normal life across the region. 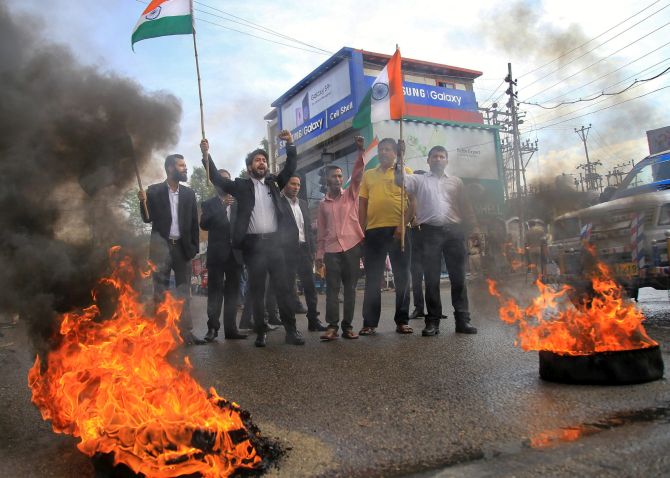 IMAGE: Carrying tricolor and chanting slogans in support of their demands, JHCBA members led by their president B S Slathia staged a rally from the high court complex and visited various markets in the old city. Photograph: PTI

The brutal rape and murder of an eight-year-old Bakerwal girl has polarised the normally peaceful town of Jammu, with the local Bar association calling for a bandh against what it termed the “targeting of minority Dogras” while the state police had lodged a case against lawyers who allegedly tried to prevent it from filing a chargesheet against the accused.

Majority of the private educational institutions also remained closed as a precautionary measure to avoid any untoward incident, officials said.

The strike, which was supported by several political and civil society groups except Jammu Chamber of Commerce and Industries, was peaceful so far though rallies and protests were staged by lawyers and their supporters at various places in the city to ensure success of their strike call.

“So far there is no report of any untoward bandh-related incident from anywhere,” Senior Superintendent of Police, Jammu, Vivek Gupta said.

He said police had made necessary arrangements to ensure that the bandh passes off peacefully.

The strike also received a good response in Kathua, Samba and Udhampur districts of the Jammu province, officials said.

Carrying tricolor and chanting slogans in support of their demands, JHCBA members led by their president B S Slathia staged a rally from the high court complex and visited various markets in the old city seeking public support to their demands, which also include clarity of the state governments stance on tribal affairs and district status to Nowshera sub-division in Rajouri district.

A group of lawyers also blocked the court road near Janipur in the city and set ablaze worn-out tires while shouting “go back, go back, Rohingyas go back”.

Opposition Congress and Panthers party along with several civil society groups have extended support to the strike call but JCCI has opposed the call on the plea that there is no justification for the strike as both the major demands of Bar are sub-judice.

“The issues raised by the Bar lacks justification to call for a strike. We should have faith in our judiciary,” JCCI president Rakesh Gupta had said, adding the Rohingya issue was being heard by the Supreme court while the crime branch investigation into the Rassana rape-and-murder case was being monitored by the high court.

National Panthers Party activists also staged a separate protest in the city in support of the bandh.

Reports reaching from Samba said, bandh supporters blocked the Jammu-Kathua highway near Jatwal. However, the protesters later dispersed and the traffic on the highway was restored, the officials said.

Police constable dead as clashes break out over CAA